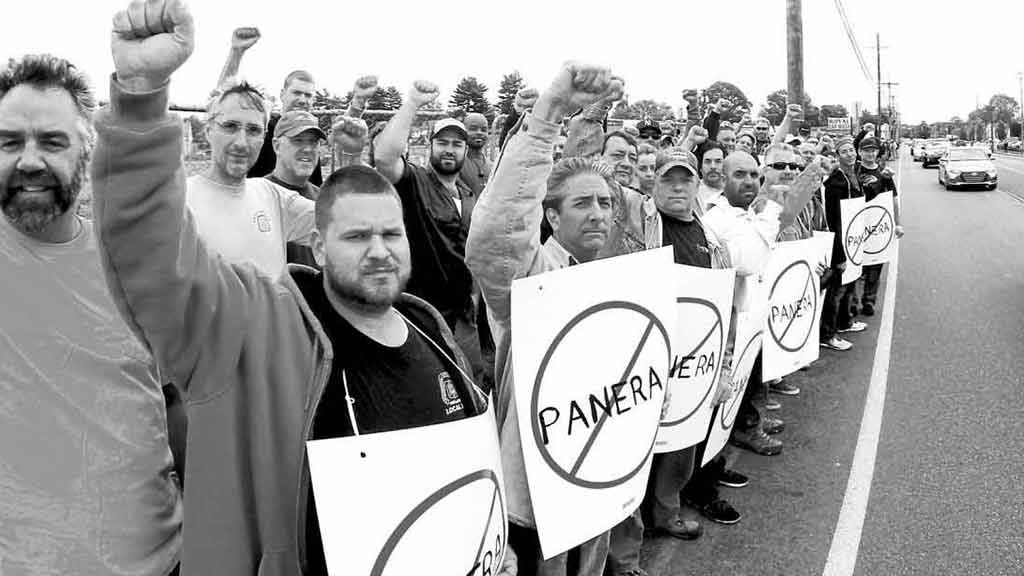 By definition, a labor union is an organized association of workers, often in a trade or profession, formed to protect and further their rights and interests.

Meanwhile solidarity, by definition, is the unity that produces or is based on unities of interests, objectives, and standards. It refers to the ties that bind people together as one.

Theoretically and in practice the two go hand in hand, not only within individual unions, but also between all unions. The ties that bind unions together are the quest for safety standards on a job, quality of workmanship, and, of course, a fair and just wage. Solidarity is part of the foundation of the labor movement. A quote by Harry Bridges, who founded and led the International Longshore and Warehouse Union in New York City for 40 years, says all you need to know about the relationship between union and solidarity: “The most important word in the language of the working class is solidarity.”

For devoted union members like Joe McMonigle, an organizer with the Philadelphia Plumbers Union Local 690, and Bryan Bush, Financial Secretary Treasurer/Assistant Business Manager with Sheet Metal Workers Local 19, solidarity means everything. It means standing together, brother with brother, understanding and respecting the rights of all unions and their members. But, sadly, what they are seeing, with increasing regularity, is the bond of solidarity being broken.

“It is a breakdown of what we do as unions, the very strength of which is we all stick together,” McMonigle said, adding that his local was chartered in 1931 and has never had a member cross a picket line. “For whatever the reason, crossing the picket line is a sad thing in my eyes. It breaks my heart and it’s becoming a real problem the way some locals conduct their day-to-day business because it doesn’t coexist with solidarity, with being involved. I was taught early in my apprenticeship and I try to teach others the same way that you have to understand we are strongest when we are together. Some do not teach that way. I’m seeing more and more where they are getting the okay to cross.”

Bush, who has been a business agent with Local 19 since 2009, agrees wholeheartedly with McMonigle. He has seen union members find different ways to cross lines and attempt to justify doing so even though, in his opinion and in that of many union members, there is no justification.

“It all comes from the top. By law, nobody can tell a union member to go in or stay out,” Bush explained. “It is in your blood as a union member, it is part of your backbone, not to cross that line. But if the business agent or the business manager says it’s okay, that’s where the problem starts.

“There are ways to beat the system. If a trade throws a picket line up there will then be two gates, one for non-union workers and another for union workers. By law, we can only picket at the gate where the non-union workers enter. Any good union man will see a picket line and know it���s a two-gate system. That should automatically send up a red flag. That means there is an issue, a labor dispute and he should call his business agent and ask what is going on. It’s common courtesy to call the building trades office and tell them you won’t be working on that job.

“The problem is some trades use this to their advantage. If I call the building trades office and say we have a situation and we’re setting up a picket line at 6:30 on a Wednesday, some trades will take advantage of that and tell their contractors to be on the job by six so they’re set up before we set up. They try to use the excuse they were already set up.”

Bush also relayed a story where the reverse happened. He spoke of a job at a Veterans Administration building where the elevator operators set up a picket line and all the other trades left the job until the issue were resolved.

“Whenever a picket line goes up, it should be honored,” he said. “Our strength is maintained when unions stand together. That puts pressure on the general contractor to do something and that issue gets resolved.”

The situation cited by Bush at the Veteran Administration work site is one example where unions stood together in an obvious display of solidarity. A current display can be found in New York City with the CountMeIn Movement. Its’ website features this message: “We are building a movement of rank and file members to fight back and take back our city from open shop”.

The issue there is Hudson Yards, at $26 billion it is the largest private real estate development project in the United States. Among the facts it touts on its website are the 23,000 constructions jobs it has and will continue to provide. Problem is not all of them will be filled by union laborers. The initial phase was completed, according to Mike Hellstrom, lead organizer for the CountMeIn Movement, with 100 percent union labor. That covered a five-year period from 2011 to 2016. Then, beginning in 2017, the next phase went from being totally union to a point where there is only one trade union on the job and the rest is non-union. It is an open shop and that creates obvious problems.

“In 2017 we started to get word the developer of Hudson Yards had intentions of bringing in non-union contractors,” Hellstrom said. “We had to draw a line and get back to a place that we all understood. We always stood together and fought for it and that’s what we are doing at Hudson Yards.

“I think they underestimated the commitment of the rank and file union members on the picket lines. Local 46 of the Iron Workers had the picket line up for 11 months, seven days a week, 16 hours a day. Rank and File members refused to go on the job and cross the picket line.”

“To give you an example we have a union project underway right across the street from (the latest phase of) Hudson Yards,” Hellstrom explained. “We started at the same time and eight months later we have two cranes up and they are just getting to street level.”

The CountMeIn Movement which is comprised of all the major New York City trade unions and is supported by the heads of New York’s City Building Trades, holds weekly demonstrations at various sites around the city as well as the Hudson Yards headquarters and they are regularly attended by thousands of rank and file union members. One reason they remain unified is journeymen taking apprentices under their wing and educating them.

“We encourage our journeymen to communicate with apprentices because they’ve had to fight for their rights before and they know how important it is to stand together,” Hellstom said.

Having veteran journeymen speak with younger members, and especially with apprentices is akin to laying the foundation on a skyscraper. While it is illegal to tell a union member he can not cross a picket line, a journeyman, who has been a member for a number of years and has walked the picket lines in support of what unions stand for, can impress upon the younger member, with a great deal of pride, what it means to be a union member.

At Local 19, they take it a step further. They built a one-hour informational session into the apprentices training on just this topic.

“There are a lot of different ways to instill in them the importance of unionism and honoring picket lines,” said Bush, who also stressed the value of supporting politicians who support labor like Pennsylvania Governor Tom Wolf, New Jersey Governor Phil Murphy, Congressman Donald Norcross, the only union electrician elected to Congress, and the President of the New Jersey State Senate Stephen Sweeney, who is also general vice president of the International Association of Bridge, Structural, Ornamental and Reinforcing Iron Workers.

“We talk to them about the history and the importance of unionism,” Bush continued. “We open it up to any questions. We want them to know that everything we have today is because of the people that came before them stood together.”

McMonigle echoed those sentiments and explained there is more to being a union member than having a card.

“We want them to know what we do and how we do it,” McMonigle said. “We tell them to remember the people that came before us. Having a card in your pocket doesn’t make you a member of a union, it’s your actions that make you a union member.”